USB Vs PS/2 Mice and Keyboards

If you Need Help, Have Questions, or have Answers for anything that has to do with Technical Issues... This is the Place to go!
Also: Everything OverClocking, Tools & Apps, Pics of Rigs, Air Cooling, WaterCooling, Vapor faze-change And Cryo-Cooling. - HardWare, Tools & Apps.
Post Reply
1 post • Page 1 of 1

USB Vs PS/2 Mice and Keyboards

Since new technology had arrived to replace some old technology for well optimised and faster speeds as well as response times. But this isn’t exactly true for most cases. Like for example Cathode Ray Tube Televisions or CRT TV had an extremely low display lag of around 1ns compared to Modern TVs that have a display lag around 1-5ms. This seem like a downside to having your newer TVs “downgraded” or have laggy side effects to the display latency, but it is despite hardly noticing an extra tiny bit of lag. Sadly using NES Zappers or Namco G-Con 45 lightgun games DON’T work with non CRT TVs because of the display lag is too high. The reason why CRT TVs respond faster than LCD or OLED is probability due to its primitive but simpler process of projecting the analog video signal – whereas digital video signals require buffering and keeping in sync between the video frames. But in this topic we aren’t going to explain much on CRT TVs nor its successors as CRT TVs are majorly replaced by ultra sleek low-power consuming OLEDs and LCDs.
However for some old technology that are still remained today despite its ancient design and function. The PS/2 port appears to remained on the market, as well in high-tier motherboards. Even so there are kind of superseded by USB port with keyboards and mice that have a high polling rate of around 1000Hz as well as some cool RGB lighting. Now Linus from LinusTechTips.com in YouTube’s TechQuickie got a video guide on the pro’s and con’s in PS/2, which you can find out below here:-

Now if you had watched this video, you should understand why PS/2 should be remained and how it’s purpose cannot be replaced by USB. Some or most gamers may prefer to use PS/2 because of their lower latency as PS/2 Interupt/Sample Rates appear to theoretically perform quicker than the USB Polling Rates. From what you seen from this video above on how PS/2 actively “interupts” the CPU to send those input commands, rather than for the CPU having to relay messages to ask for the USB input device’s current status.
“But what about its (PS/2) Interupt Rates as well as the USB’s Polling Rates?” you may ask? Well for most keyboards you can change the Repeat Rate by loading your Windows Control Panel >> Keyboard >> Speed Tab by moving the slider to maximum. I’m not sure what it’s maximum Interupt rate is for keyboards but it appears to have a max of 200Hz. For PS/2 Mice, you can adjust the Sample Rate up to 200Hz as well increase the buffering from which you could load from Device Manager >> Mouse >> 'Name of Mouse' >> Properties >> Advanced Settings >> Sample Rate, which should look like this:- 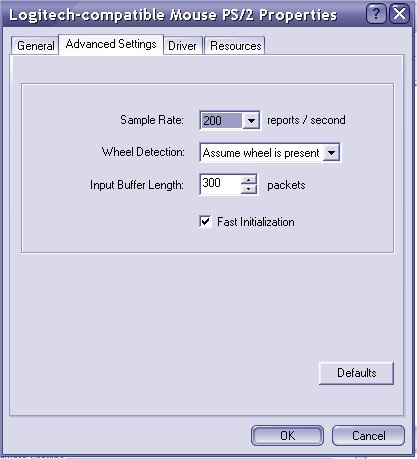 But how secure and how does both PS/2 and USB perform? Well that is a tricky question, because comparing a PS/2 Mouse at 200Hz Interupt Rate to a USB 1000Hz Polling Rate can be hard to see those results. It could depend on how complicated the USB drivers are to relay data into the computer to trigger various commands. Also lets not forgot on the sensitively of the Mouse on many Dots Per Inch or DPI. Most optical mice have improved on its movement as well using the laser to scan any textures it detects as well to correctly detect specific movement. There are PS/2 Mice available, but not all USB mice and keyboards can be compatible with simple USB → PS/2 adapters. So you may need to think twice on finding which Keyboard or Mice will work for your computer.
In my personal opinion I think you best of having at least one PS/2 port from your motherboard. “Why do you think its best?” Well for most computers, not all of them have the important USB keyboard drivers in BIOS mode. Besides if you cannot alter BIOS setting by pressing the [Delete] Key or boot to Windows Safe Mode by pressing [F8], then you will be out of “Ctrl”. Luckily for Raspberry Pi it does come with its important drivers for its 4 USB 2.0 ports, as long you have installed Raspbian and BerryBoot properly by using NOOBS downloaded into your Micro SD Card . Not also that PS/2 Keyboards are recommended in my opinion but it gives you more control as hackers tend to sneak into your PC and replace your important USB drivers to hijack your PC and makes you seize control of your keyboard. Or even worse actually log and read your keystrokes when dealing with confidential office work, which are against the Data Protection Act 1998!
And as for PS/2 Mice its best to have at least 2 buttons (including a Mouse Wheel button and the Wheel itself). But for USB Mice it depends how well it responds from the way you click, move as well observe how fast it responds. You may not find a lot of high-tier PS/2 Mice on the market, as you will maybe find a lot of USB Mice with programmable buttons, a second mouse wheel as well as those fancy Sniper or Zoom buttons. If your USB Mice is fully compatible to use a specific PS/2 port adapter into your Motherboard, then you should be lucky to control it. Latency wise, well you may need to do some tests as well measure its Input Lag. You can compare the Fire Button by assigning both your USB Left Mouse button and your PS/2 Keyboard Space Bar key. You can barely notice any difference by using either Left Mouse button or Space Bar; like having your right hand on the mouse and clicking Left Button, while having your left hand above the [W,A,S,D] keys with your left thumb hovering above the Space Bar.
I cannot give you a clear answer if your PS/2 Mouse at its maximum Interupt Cycle of 200Hz will beat the USB version. But for avoiding any disasters you maybe best buying USB Mouse and get those PS/2 Mouse adapter, because if your PS/2 Adapter breaks its pins as it is more fragile than the USB port, then you will be relieved that it hasn’t broken your Mouse completely as PS/2 adapters are cheap and easily replaced.
Hope this helps and here are some reference links that can help you learn more. Thanks for reading!
https://www.sevenforums.com/hardware-de ... d0605e9b87
https://www.reddit.com/r/ECE/comments/5 ... ng_vs_ps2/